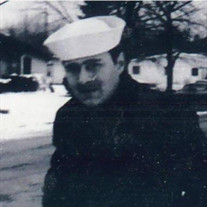 LIFE CELEBRATION SCHEDULE Henry Curtis Setser, age 58, passed away unexpectantly in his home in Phoenix, AZ on January 12, 2022. Henry is survived by his wife, Cindy Matthews (Setser); his mother, Sarah McHargue (Bennington); his stepfather, Vester Bennington; his sisters, Lessa McHargue and Tina Carston; and his two sons, Thomas and Jack. He is preceded in death by his father, Henry Setser. Henry was born in Mt. Vernon, KY on March 10, 1963 to Henry Setser and Sarah McHargue. He was raised in Indiana attending River Forrest High School in Lake Station, IN. Henry was a proud veteran of the United States Navy. He was a boatswain’s mate that honorably served in Bahrain, Abu Dhabi, and the Persian Gulf. After Henry’s service, he became an electronic technician that specialized in working on CB radios. He was a loving father that was dedicated to the success of his sons. Henry was a longtime resident of Valparaiso, IN for over 20 years. Preceding Henry’s death, he moved to Phoenix, AZ to be closer to his mother. Henry had a passion for computers, firearms, and his family. He was a skilled craftsman. Henry’s service in the Navy played a very important role in his life. He always valued the importance of attention to detail and giving back to those who served. Henry’s favorite foods included fried chicken, steak, and White Castle. His unique humor will be dearly missed. Henry always found light in the interservice rivalry between the Navy and Marine Corps. He had a great respect for Marines, but was always finding ways to joke around and fuel the rivalry. The love and joy that he brought into this world will be missed by all. A Memorial Service and viewing will be held on the morning of January 31, 2022 at Eastlake Mortuary, 1715 E Jefferson St, Phoenix, AZ 85034. Following the service, the burial and funeral honors will be conducted at 12:30pm at the National Memorial Cemetery of Arizona, 23029 N Cave Creek Rd, Phoenix, AZ 85024.

The family of Henry Setser created this Life Tributes page to make it easy to share your memories.

A comforting word from you means a lot.

Send flowers to the Setser family.